Like any major city, it can be confusing to visit for only a short time. There’s simply so much to do and it’s difficult to prioritise what to see and what to miss out on. Madrid is no exception and although not known primarily as a tourist resort there’s a huge amount to do for any visitor.

Pieta being restored, Prado Museum, Madrid The Prado Museum is regarded as one of the world’s great museums. The multinational exhibits include works by Spanish artists such as El Greco and Velázquez, Italian painters such as Fra Angelico and Raphael and Flemish artists as Bosch, Rubens and Van Dyck. The best known works include Velázquez’s Las Meninas (The Maids of Honor), Goya’s Naked Maja and Clothed Maja, and Bosch’s The Garden of Delights. 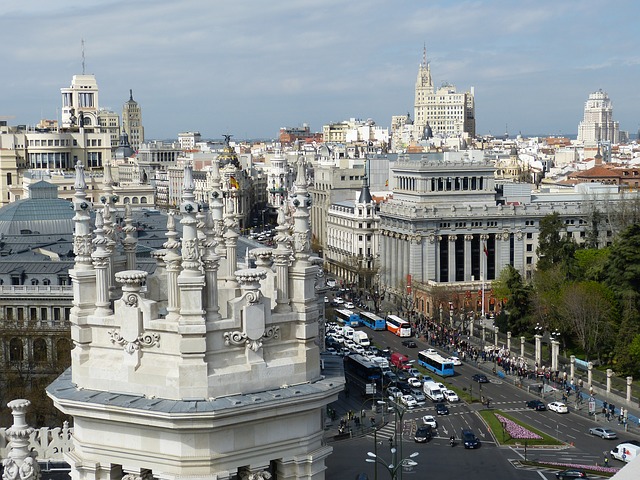 The Palacio Real has 3,000 rooms – more than any other palace in Europe. Inhabited until 1941, the palace is now only used by the Royal family for state occasions. The interiors are magnificently decorated with frescoes by Tiepolo and Giaquinto, as well as paintings by Goya, Rubens, Valezquez, and El Greco. There are dozens of Flemish and Spanish tapestries and endless dazzling rococo decorations. Check out the Porcelain Salon. Simply stunning, it is covered in coloured relief tiles illustrating Chinese scenes. The king’s Arabian Salon is a beautiful reproduction of the Sala Dos Hermanos in the Alhambra. About 30 of the 300 rooms in the palace are open to the public.

Plaza Mayor, Madrid The Plaza Mayor is an impressive 17th century arcaded square in the heart of Madrid. It has played a vital role in the history of Spain for over 400 years and has seen bullfights, festivals, plays, public burnings of heretics, and the crowning of kings. It is adorned with eye-catching multicolored murals and is surrounded by baroque architecture. In the 1970s, vehicles were prohibited from the plaza and as a result, it is a lively place in summer filled with crowds attending concerts and festivals or simply milling about. The square plays host to a range of shops and cafés and to some of the most spirited tapas bars in town!

La Casa de Campo is a large park with densely wooded areas, a large lake, a swimming pool and tennis courts. It is also home to the Madrid Zoo and the Parque de Atracciones. Originally a hunting ground for Felipe II and a royal park, the Casa de Campo is now an area for public entertainment. The zoo houses nearly 3,000 inhabitants and shows are performed daily and the amusement park offers rides, restaurants and bars.

The Museo Arqueológico Nacional houses artefacts, sculpture, jewelry and art spanning many centuries. The Dama de Elche and the Dama de Baza are two amazing sculptures of women standing gracefully on the first floor. They are both fine examples of Iberian sculpture from the 4th century BC. There is also a subterranean replica of the Altamira Cave where 100,000-year-old cave paintings have been meticulously reproduced. Visit the National Library in the same building and see a first-edition copy of Cervantes’s Don Quixote.

Puerto del Sol, Madrid The Puerta del Sol is regarded as the true geographical heart of Spain – lying right in the middle of Madrid. All distance markers along the roads on the national Spanish highway system use Puerta del Sol as their reference point and on New Year’s Eve each year Puerta del Sol becomes Spain’s “Times Square” with thousands of revelers packing the square swallowing grapes at each of the twelve strokes of midnight. The Puerta del Sol is the most popular meeting place in Madrid.

Café de Chinitas hosts a very impressive display of flamenco dancing. The show is very popular and tends to sell out very quickly so reserving is essential. It is regarded as the best location in Madrid to enjoy authentic flamenco music and dance.

Bull fighting, Madrid While bullfighting is certainly not to everyone’s taste, it is a tradition the Spanish have held onto proudly over the centuries. Not for the faint-hearted, the fervor, bravery and skill of the matadors captivate the crowd as the battle between man and bull takes place. The Las Ventas bullring is often referred to as the mecca of bullfighting. The best time to visit is from March to October when there are bullfights at Las Ventas each Sunday from 7:00 pm.  Beware these are of course not too everyone’s taste and if you’re unsure this is probably an event to skip.  It’s difficult to describe and nothing like watching on TV, incidentally while in Spain you can access your home TV stations by using a system in this article – Can I Get BBC iPlayer in Spain.

Designed at the beginning of the 18th century, the Museo de la Real Academia de Bellas Artes houses one of the most important art collections in Spain. Its riches include works by Goya, El Greco, Murillo, Velazquez, Correggio, Rubens, and Tiepolo. Make sure to stop at the Instituto de Calcografia located inside the building to buy incredible limited edition prints from the original plates.

Buen Retiro is the largest and most beautiful of all Madrid’s parks with over 130 hectares of woodland. Enter through any of its four fine gateways, located in the Plaza de la Independencia, the Calle de Alcalá, the Calle de O’Donnell, and the Calle de Alfonso XII. Hire a boat on the lake, smell the magnificent rose garden, see the beautiful Cecilio Rodríguez gardens or simply enjoy the peace by taking a leisurely stroll in the park. You may be lucky and stumble across an art exhibition at the Palacio de Velázquez and the Palacio de Cristal located in the centre of the park.

With reference the link above explaining how to access the BBC when you’re travelling, there a great option for us on a short holiday.  If you only need the service for a short time, there’s a free trial that works well here for 14 days/