For anyone visiting Naples, the highlight are often the archeological sites such as Pompeii and Herculaneum. The site sits on the outskirts of the City of Naples in a fairly ordinary, urban area. However because of the excellent train network for visiting a site basing yourself outside the city is often a good idea.

Not only will you avoid the hassle and congestion of the city centre, you’ll also find some fantastic little hotels all at very reasonable prices. For instance try the Ruins Hotel which sits just outside the gates of the other great site Herculaneum and a few minutes from the train which can run you into Naples, Pompeii and even the base of Vesuvius. 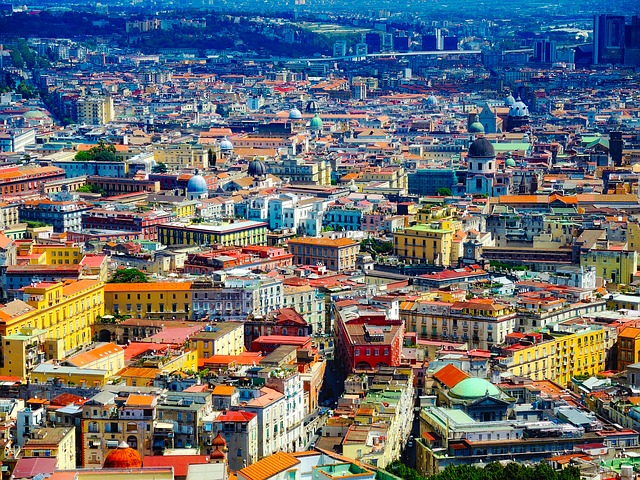 There is little doubt that Pompeii is one the most significant Roman sites anywhere in the world. Not only is it famous because of the disaster but it leaves a wealth of information on everyday Roman life. The thick layer of ash which landed after the eruption of Vesuvius in some ways preserved teh city for posterity albeit at a huge human cost.

Most of the building and even much of the content in Pompeii was preserved because the ash contained little hard material. In Herculaneum for example the mud solidified so that the preservation wasn’t quite as ‘gentle’. You can still see murals on the walls, pictures and even drawings of local events and characters.

If you have more time, then the centre of Naples has much to offer the tourist too. There is a thriving port and many spectacular churches, museums and Roman sites. It’s not the prettiest city and you do have to be careful about pickpockets in many areas. However it is a city that you can walk around in relatively easily, although the lack of signs sometimes makes orientation difficult. It makes sense to find a significant landmark to help with this and also do some homework before you go.

Spending a little time researching can be a real bonus when visiting Naples. One suggestion is to sign in and watch some News or reports on Italian online TV Station – the biggest is probably RAI Player which you can access using a VPN Italia – it’s easy to use and will allow you to surf like an Italian before your trip –

As well as the train network, there is also an efficient and inexpensive bus network which alongside the metro is great for travelling around the city and it’s suburbs. Taxis and private hire cars can be expensive so you can save a lot of money by using public transport. If you find it confusing try the Naples Sightseeing bus, it’s a little bit more than the standard buses but you can hop on and off between the major sites without switching buses and routes.

A real treat for the eyes is the funicular railway up to San Martino, at the top you’ll get some great views. You can walk back down into the city if you’re physically fit along the steep roads.